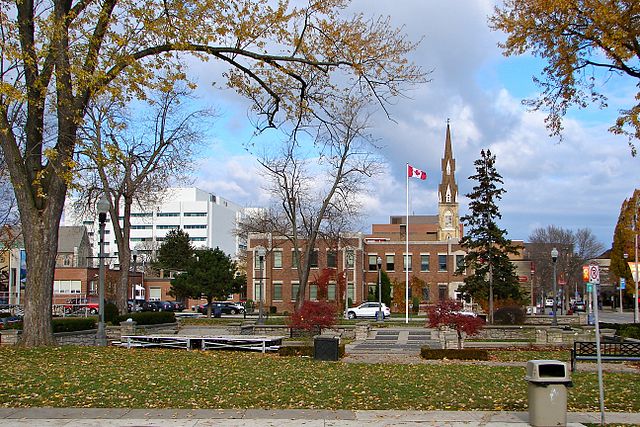 Oshawa is in the Regional Municipality of Durham. It is on the Lake Ontario shoreline, approximately 60 kilometres east of Toronto. Oshawa is often viewed as the eastern anchor of the Greater Toronto Area and the Golden Horseshoe.

Oshawa has huge ties to the automotive industry because it is the location of the General Motors plant. Oshawa is the self-proclaimed Auto Capital of Canada. The city plays host to three post-secondary institutions (Durham College, Trent University and University of Ontario Institute of Technology).

The name Oshawa comes from the Ojibwaa term aazhaway meaning just across or the crossing place.

It is believed that Oshawa began as a transfer point for the fur trade. Furs were transported via canoe by the Mississauga Indians at the Oshawa harbor and sent to the trading posts located to the west near the mouth of the Credit River.

Oshawa was incorporated as a village in 1850. The village became an industrial centre with tanneries, asheries, and wagon factories. Oshawa also became heavily associated with the automotive industry as the General Motors plant made this city its home.

In 1822, a “colonization road” known as Simcoe St. was constructed. This road facilitated settlement into the area. The road followed a path of an old native trail known as the Nonquon Road. Oshawa was home to many factories and had a great connection to local areas through the rail service that was offered.

Oshawa offers vibrant and dynamic cultural projects and programming. It is a very creative community with various festivals and events, performing arts, history and heritage exhibits and galleries and public art.

Oshawa offers several parks and trails, which provide you with an opportunity to participate in physical activities such as walking, running, cycling, and more. The city is also home to a number of natural areas that are perfect for taking in the beauty of nature.

Downtown Oshawa is a mix of culture, business, entertainment and academic. It is a beautiful place where people can work, learn, play and meet for drinks and exceptional food.